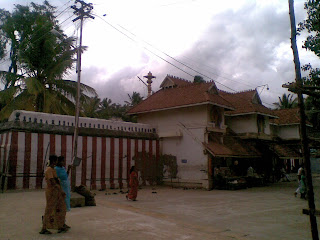 Worship of Serpents had been there across all parts of the world since ancient times. Snakes had been worshiped by Hindus, Buddhist, Jains for ages. Even in ancient Egypt, Mesopotamia, Greece, Rome, the worship of Snake had been in vogue in ancient period. The Egyptian king had the symbol of cobra’s hood in his crown, even their Gods and Goddesses. (eg. Osiris). There are similar instances from Babylon and Mesopotamia. Greece worshiped snakes as god for protection. They believed that the slain soldiers will be reborn as snakes. Even its believed that Athens was guarded by a snake in 5th century BC. Its also their national symbol. In Ancient Rome, people believed that while felling a tree, if a snake is killed, its considered as bad omen, and God also moves out of that place. Australians and the Mayans also worshiped Snakes. Excavations in  Mexico  have lots of pots and utensils with Snakes symbol embossed on them.  In Africa Pythons are being worshiped even today and they worship it as God for Knowledge.
In India worship of serpents is there from pre historic period. In U.P, Naga Panchami is observed even now. In Punjab, people draw pictures of Snakes on the wall and worship. In Bihar, ladies take fast for 3 days and worship Serpent God. In W.Bengal, Manasa Devi is considered as the head of all Serpents. In a place called Subramanya in Karnataka, Snake is the worship deity. In Andhra in Laepakshi, there is a 6 feet high snake idol that’s worshiped.
In Kerala, worship of Cobra is of paramount importance. There are close to 16,000 temples ( Sarpakkaavu) in Kerala, across all villages. Prominent among them are Manaarshaala, Vettikaadu, Paambummekaatu  mana. In Manaarshaala, even today, a lady remains as Spinster , through out her life,  and does daily puja for this deity.
In Tamilnadu, in Thiruverkaadu, Devi is believed to have appeared initially as Cobra. In Thiruchengode, there is a 60 feet long cobra statue for worship. In Nagerkoil, we have a temple dedicated exclusively for Nagaraja. The name of this town is named after this temple only.  If we look at Valmiki Ramayan ( episode 67, sloka 46-49), its mentioned that Nagas lived in Mahendragiri mountain area ( 20kms  from Nagerkoil) and worshiped Serpent god.
Going  back to mythology, long ago, a lady was cutting grass in this area. She was surprised when she found blood oozing out from her sickle, as she accidentally hit a stone. She went and brought the nearby villagers and from then, a small temple was set for  Nagaraja. ( I believe this story because, we have a similar story in our family. Our ancestors who had earlier migrated from Kanchipuram to Kanyakumari more than 1000 years back have a similar story. When a lady was cutting off cactus plant in a field, red blood started oozing out. After checking with astrologers it was found that their family deity (Devi) from Kanchipuram has moved along with the ancestors when they moved to Kanyakumari and stayed in that cactus for quite sometime. Later a temple was built at that place.)

During 1516 to 1535, Boothala veera Sree Veera Udhaya Marthanda Verma  was ruling this area with head quarters as  Kalakkaadu. He was suffering from Leprosy. He came to this temple every Sunday and he got cured. From then on, every Sunday, this temple is crowded with devotees. Even today, the main priests of this temple is from the “ Paambummekaatu  Illam” family of Nambuthiris from Kerala, who worship Nagaraja, generation after generation. They even rear Snakes like Infants.

Another attraction of Nagerkoil is the Nagalinga  flower of the Cannon-ball tree (Couripita gynensis). The combination of its 6 petals, fleshy disk, stamen, and the reduced styles are so marvelously coinciding with a Shivalingam being protected by a 5 hooded Nagaraja.

Behind the Sanctum sanctorum, there was a dense growth of a herb ( Oda valli). Recently temple officials removed them, as they found lots of snakes were living there. After that, they tried to regrow the herb. Till date it hasn’t grown again. Earlier every devotee was given 1 leaflet of this  herb as Prasadam. Every leaf had different taste it seems.  Latest Science has discovered that the venom  of Cobra can be used as a medicine to Leprosy! What was believed earlier by our ancestors are now been proved as science by modern science.
Lots of Cobras are there near the temple area. Wiith in 1 mile area from the temple, there s no history of any1 being killed by the venom of a snake bite.Page 48, Volume 11 of Encyclopedia of Religion & Ethics, published in the U.S , has taken note of this point.
Inside the temple, we get to see lot of Jain inscriptions, including Mahaveer Jain & Parasvanath – the 23rd Thirthankara. In 1968, when they were cleaning the temple pond, they found a Durga idol and it has been installed on the right side of the temple. The Devi is like Vishnu Durga. We have deities for Lord Muruga & Idumban. So Kandha Sashti is also a main day of worship here. 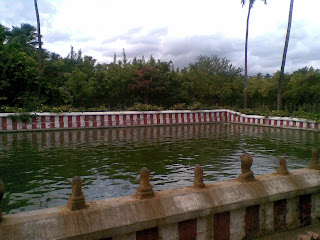 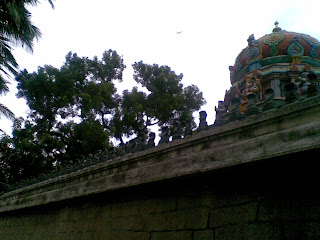 ( Even on the outer walls of the temple, we see idols of snakes – 100s of them placed all round. While I was standing behind the Anantha Krishnan Deity, behind the temple, got the darshan of Garudan ( as seen in the picture). I was thinking that why do people call Nagaraja as Krishnan. That was a lesson to my wrong thought. Krishna manifests in all forms. God is one. Forms only differ. The Garudan was circumventing the temple for more than 10 minutes before it flew eastwards )
There is a strong belief that this serpent was Krishna's erstwhile  enemy Kalia. Its been believed that Lord Shiva is being installed in between these 2 deities, mainly to avoid any possible conflict between Lord Krishna & the erstwhile Kalia. ( Im convinced about this logic, because, during Narasimha avatar, after Lord Narasimha was very ferocious even after killing Hiranyaksha . Lord Shiva takes the form of Sarabeshwar and hugs Narasimha to absorb all his heat and anger. Might be, a similar logic applies here also.) 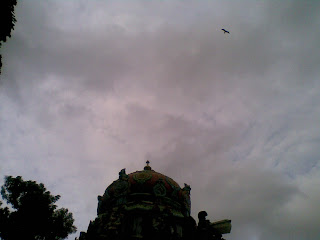 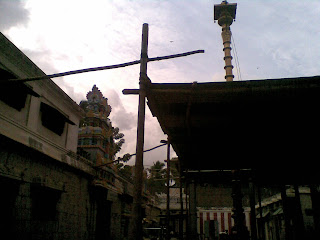 In mid 18th Century, King Marthanda Verma of Venad kingdom  ( South Travancore) had lot of enemies. One day he was taking rest in the South side building of the temple. Knowing this, his enemy went up to kill him. His sword missed target as he was interfered by a cobra in between. The king woke up in the meantime and caught his enemy. From then on, the South Nada ( South Entrance) is called as Maha Meru Maaligai.
JAIN BELIEF:
Once upon a time, a pair of Snakes lived in this place. Mahibalan killed them. During death they were listening to the chanting of Parasvanath. By virtue of that, they got rebirth as the King and Queen of Snakes in the underworld. Later , a Gandharvan named Samwaran was travelling across the sky. He was disturbed by the chanting of Parasvanath. So he made heavy rain fall to submerge him. The king cobra ( Dharnendra) raised its hood over Parasvanath and protected his tapas from the rain. As rain continued, water level raised. To prevent Parasvanath from sinking, the Queen Cobra ( Padmavathy) became a Lotus flower and gave seat to Parasvanath. Samwaran couldn’t succeed in his effort.  We get to see 2 huge snake statues in the temple, depicting this story.
When the temple was first constructed Nagaraja told in the dream of the king of Kalakkadu that his roof should be only a thatched roof. So the Western side roof is still a thatched roof. Every  year, when  they remake the roof, they see a snake in it.
The main diety in the sanctum  sanctorum is installed on water. Water keeps oozing slowly and the sand from this basement is given as Prasadam to devotees. 6 months the sand will be black and for next 6 months, it will be normal sand. For centuries together, they are taking up sand as prasadam and giving to devotees. But there is no crater created in that spot from where sand is being continuously taken as prasadam . The level of the basement of the sanctum sanctorum is remaining the same. This is still a grerat puzzle and miracle. There is neither any Peetam nor any roof for this sanctum sanctorum.
During the 8th century, this area was referred as Kottar only. Thirugnansamndar has mentioned about Kottar being a main centre for Jains during his period. Till the 16th Century mid, this was a Jain temple only.